Get fresh music recommendations delivered to your inbox every Friday.

from Live At Robert Johnson 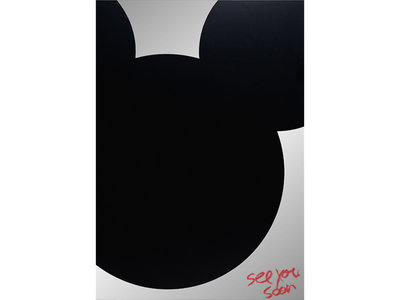 SEE YOU SOON
Robert Johnson Multiples and Editions
Artists of diverse disciplines advocate for Robert Johnson’s survival. 27.05.—22.09.2020
In this current state of the cultural industry, in which club culture is faced with a mandatory and long hiatus, the team of Robert Johnson has conceived an innovative and one-of-a-kind fund- raiser called SEE YOU SOON. Donators exceeding a minimum will be granted an artwork of their choice. Artworks, which create a physical relationship between the club and its audience.
There are contributions from Ata Macias, Tobias Rehberger, Anne Imhof, Dixon and Stefan Marx, just to name a few.
In 1999, an inspired collaboration of visual artists and DJs alike established a new expansive and collaborative understanding of a space, that is dedicated to club culture, music and gastronomy. Twenty-one years later, this DNA remains at the core of the internationally renowned Robert Johnson; a steadfastly and genuinely vibrant place of cooperation and interdependence between DJs, musicians, designers, visual artists, gastronomers, shaped by the University of Art and Design Offenbach and the Academy of Fine Arts Städelschule Frankfurt. Its distinguished and ambitious musical as well as artistic direction has always been essential to Robert Johnson.
Art, Music, Design
Countless artistic collaborations and interventions transformed Robert Johnson into a project space for artistic discourse. Be it Städelschule Frankfurt professor Tobias Rehberger’s space- encompassing installation on the occasion of the soccer world championship 2006, or a meticulous brushstroke all-over mural by Carsten Fock (2008), the recycling series of Martin Wenzel (2008), Michael Riedel’s upside down replica of the Robert Johnson interior (2004), and many more contributions by artists like Holger Wüst, designer Michael Satter, or Illustrators Nadine Kolodziey and Timo Lenzen. Co-founder Ata Macias’ body of work has been extensively on display at the exhibition Give Love Back. Ata Macias and Partner. An exhibition on the question of what applied art can be today (2014–2015) at Museum Angewandte Kunst, Frankfurt.

As the name states Live at Robert Johnson is the associated label of the respected venue in Offenbach and incorporates what the club stands for. The imprint has been establishing a solid ground for the new Frankfurt sound since 2009. By featuring internationally acclaimed artists LARJ has been providing DJs and audiences with essential tunes in an extensive range of high-quality house music. ... more